Calyia Stringer had a smile on her face the day she posed for a photo with a yellow flower in her hand. The toddler beamed with pride as she showed off the bloom before handing it to her godmother, Jatoria Foster.

“She was so happy,” Foster said. “That was one of the best memories I have of her.”

No one thought the same image would end up on the lid of Calyia’s casket — until the unthinkable happened. The 3-year-old was killed last September when a stray bullet tore through her grandmother’s bedroom in East St. Louis, Illinois. For Calyia’s funeral, her family wanted to remember the happiest moments of her life, so the funeral home decorated her casket with three photos of the girl.

The art of wrapping a casket in imagery — similar to the way companies wrap logos around cars, trucks, and buses — is increasing in popularity as mourners look for memorable ways to celebrate their loved ones’ lives. Across the country, casket wrap companies create custom designs, often for grieving parents who have lost their children to trauma, including from gun violence. Although diseases sometimes kill kids too young, firearm-related injuries were the leading cause of death for children in the United States in 2020, ahead of motor vehicle crashes, according to an analysis published in the New England Journal of Medicine.

The wraps for children look like something one “would see in a child’s room, not as a child’s casket,” said Damian Ferek, president of CasketWraps, the West Virginia company that designed Calyia’s custom casket. His company has been creating them since 2014, when the marketing business he runs got a request to wrap a casket. Kids’ caskets often feature superheroes and rainbows, unicorns and teddy bears, alongside photos of the smiling children.

Desmond Upton Patton, a professor of social work and sociology at Columbia University who researches grief and violence on social media, said this emerging art form is a coping mechanism for grieving families. For some parents, he said, casket wraps allow them to “take control of an experience that they essentially had no control over.”

“It allows them to reimagine the narrative,” Patton said. “It’s a different way of telling the story of a loved one that moves beyond the pain and focuses on the beauty. That is a beautiful definition of resilience.”

Sukeena Gunner vividly remembers seeing her 14-year-old son’s casket after he was killed. A rising football star, Jaylon McKenzie died three years ago after shots rang out at a house party in Venice, Illinois, just across the Mississippi River from St. Louis.

“Once they opened the door, I saw my baby laying in that casket, it paralyzed me,” Gunner recalled. At that moment, Gunner said, she fell to her knees. But a series of photos, including images of Jaylon in his football uniform, embossed on the outside of his casket helped Gunner remember the highlights of Jaylon’s life, not just his death. 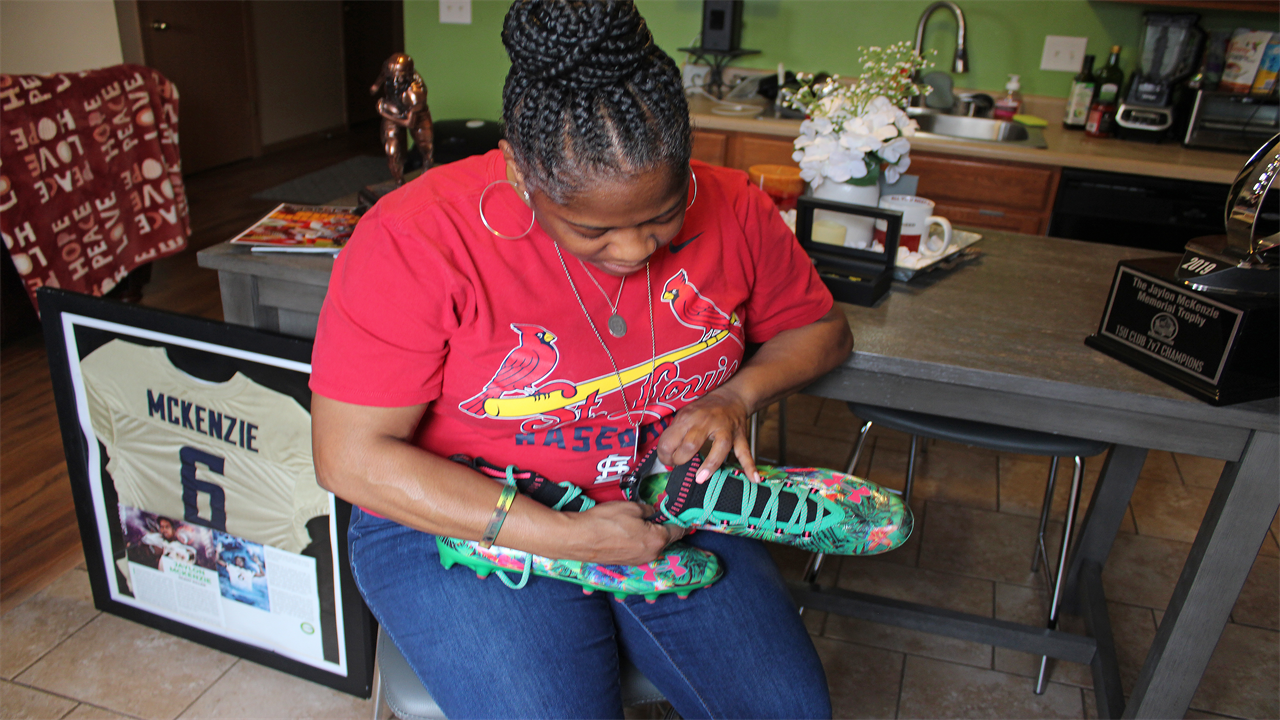 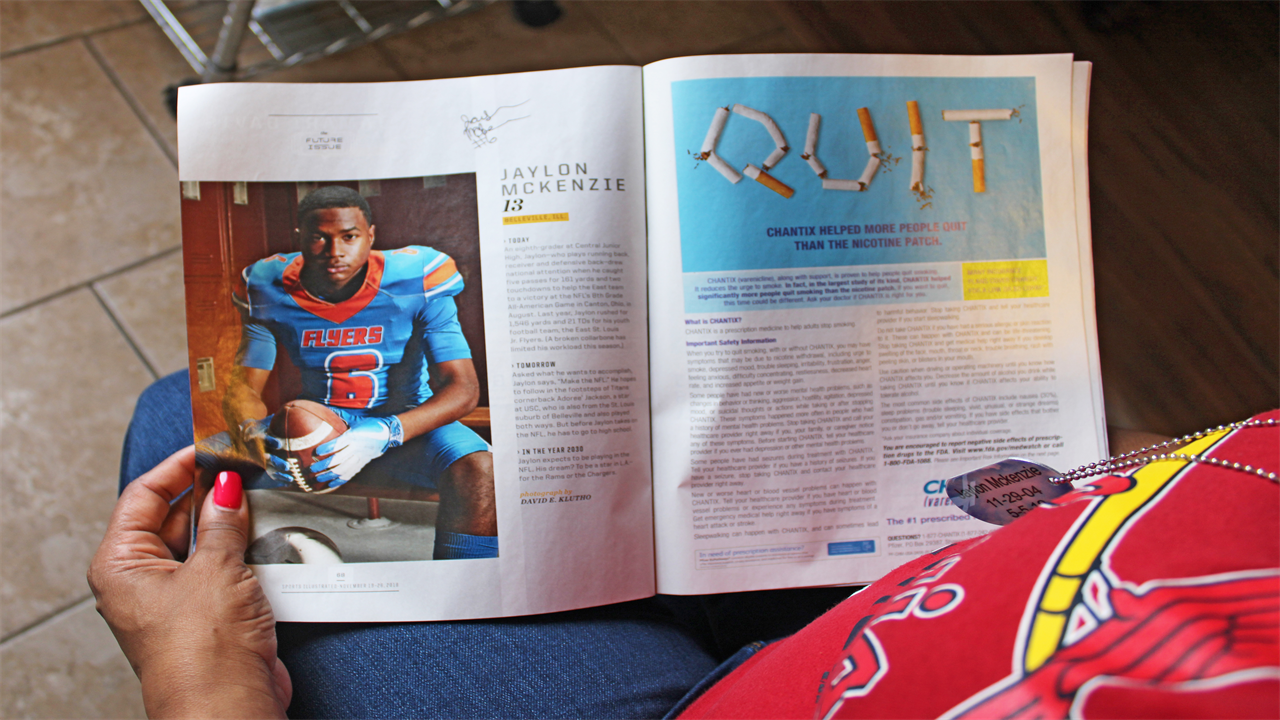 “He was a kid that would run 40 touchdowns a year, anywhere between four to five a game,” Gunner said.

The custom design was a first for Serenity Memorial Chapel, the funeral home in charge of Jaylon’s service. Serenity’s owner and president, Gerald T. Johnson, who has worked in the funeral business for more than 25 years, said his funeral home often takes care of the arrangements for victims of gunfire in the St. Louis region, where such violence is persistent.

He has even seen violence outside one of the funerals his company arranged. Earlier this year, three people were shot in the parking lot of Serenity’s St. Louis location. “The police did an investigation, took the tape down, and left,” Johnson said. “And we still had the funeral.”

Tan Gates, Serenity’s general manager, now regularly works with Ferek’s company to create custom casket wraps. She spends countless hours with grieving families. “It’s not just wrapping a casket, it’s getting to know a person,” Gates said. “People are looking at death, but we see life in what we’re doing.”

That’s why she looks for ways to comfort families as they mourn the loss of children and young victims of gun violence. In addition to ordering casket wraps, Gates often goes shopping for a child’s favorite things, such as stuffed animals and balloons.

The funeral workers and artists do become invested. In August, Ferek drove more than 600 miles from Morgantown, West Virginia, to Belleville, Illinois, to deliver five custom caskets himself ahead of a funeral for five children who died in an apartment fire. Each casket featured the child’s name and a photograph of them. 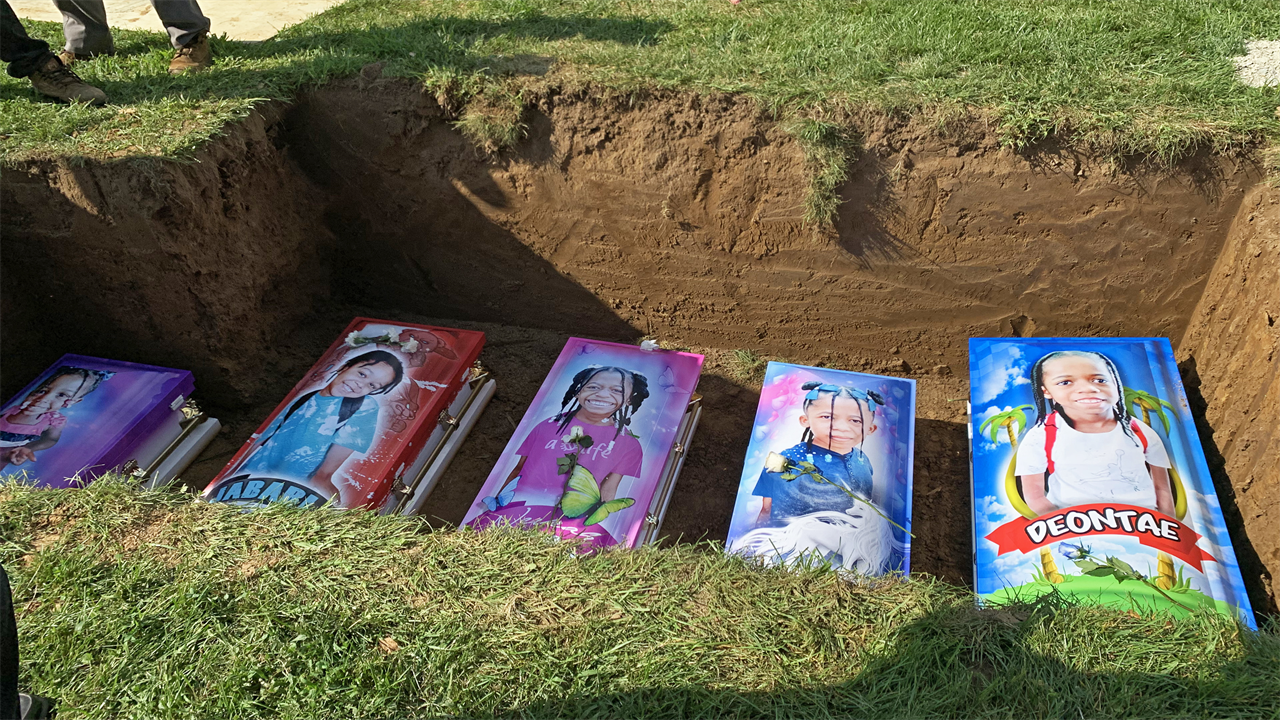 In Philadelphia, Harry Fash of Eastern Casket adds cartoon designs to caskets for children for free. He studied art at Temple University for a year before switching his major to business. His skills as an artist help him create unique lid inscriptions for caskets.

Located in the heart of North Philadelphia, Eastern Casket opened in 1972. But it wasn’t until 2010 that it started creating vinyl casket designs, too often for gun violence victims. Requests range from musical instruments to popular cartoon characters. In recent years, he said, he created a casket with a “Frozen” theme for a child killed in crossfire and a Spider-Man one for a child who died when another child accidentally fired a gun that wasn’t locked up.

“We are in an area called Nicetown,” Fash said. “But it’s really not that nice.”

Casket wraps aren’t exclusively for children. In Los Angeles, Shameka Nicholas helped find an artist to decorate the casket of her friend Jermaine Carter, who had been a member of the Bloods and went by “O.Y.G. Redrum 781.”

Carter spent years promoting peace in the streets of Los Angeles and across the country. Six weeks before Carter died of cancer at age 49, he described the kind of casket he wanted to be buried in: one whose right half resembled a red bandanna and whose left looked like a blue bandanna, to represent peace in the streets between the Bloods and Crips. He wanted a black panther in the middle.

Nicholas questioned whether Carter’s vision could become a reality, but Carter was confident. 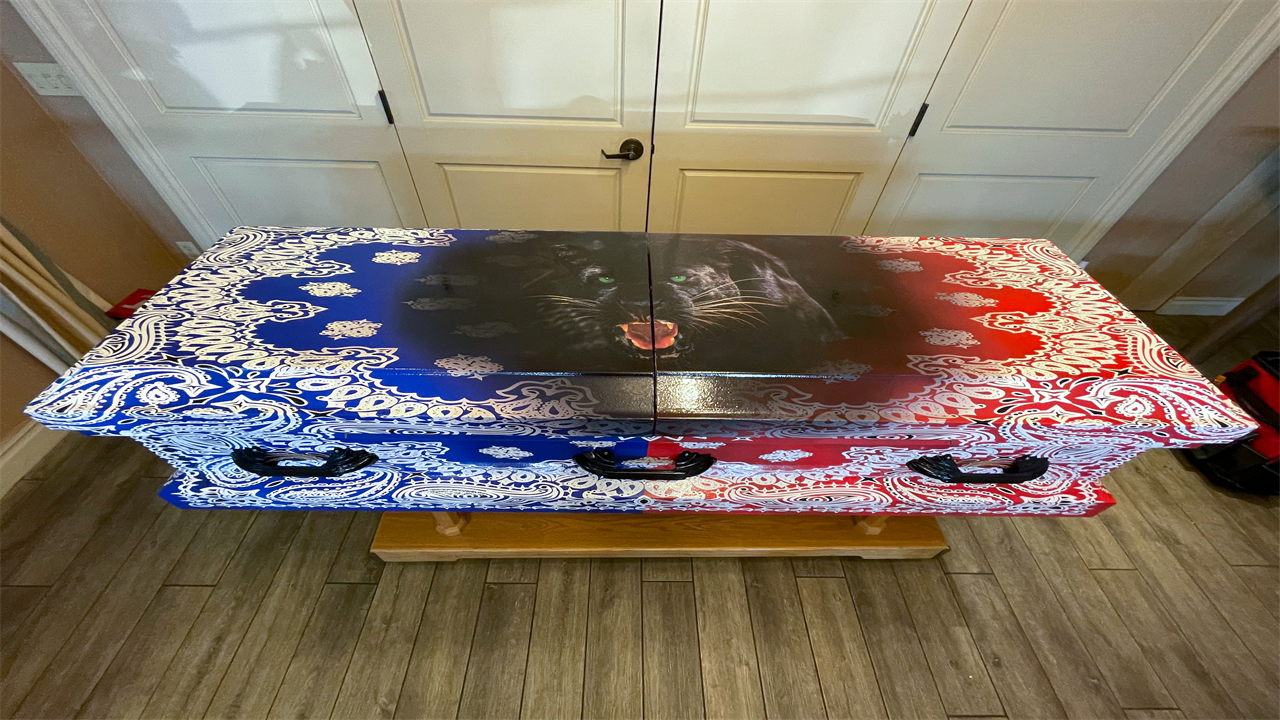 Carter’s custom casket cost about $2,000. But Lanier is thinking about turning the business into a nonprofit. That way the public can make donations and she can serve more families who can’t afford to purchase a casket wrap. Lanier said requests for casket wraps have quadrupled since she started a few years ago.

“That’s part of respect for the dead,” Lanier said. “They had a footprint on the Earth. It’s just a very lovely way of honoring them.”

Custom Caskets for Kids Look Like Something You ‘Would See in a Child’s Room’ https://khn.org/news/article/custom-caskets-for-kids-look-like-something-you-would-see-in-a-childs-room/

The Weekly Podcast: Fourth of July: