How a Doctor Breaks Norms to Treat Refugees and Recent Immigrants

How a Doctor Breaks Norms to Treat Refugees and Recent Immigrants

AURORA, Colo. — Fatumo Osman, a 65-year-old Somali refugee who speaks limited English, was in a bind. She made too much money at a meal prep service job so she no longer qualified for Medicaid. But knee pain kept her from working, so her income had dropped. She could reapply for Medicaid, get her knee fixed and return to work, at which point she’d lose that safety-net health coverage. Her first step was getting a note from a doctor so she wouldn’t lose her job.

So, Osman came to Mango House, a clinic in this eastern suburb of Denver that caters primarily to refugees and turns no one away, regardless of their ability to pay. Dr. P.J. Parmar designed the clinic to survive on the Medicaid payments that many doctors across the U.S. reject as too low.

The clinic is just one part of a broader refugee ecosystem that Parmar has built. Mango House provides food and clothing assistance, after-school programs, English classes, legal help — and Parmar even leads a Boy Scout troop there. He leases space to nine stores and six restaurants, all owned and run by refugees. Mango House hosts a dozen religious groups, plus community meetings, weddings and other celebrations. When Parmar needs an interpreter for a patient from any of a dozen languages spoken in the building, he can easily grab one of his tenants.

“This is what I call a medical home,” Parmar said.

Although it’s not part of the formal U.S. refugee resettlement program, Mango House is in many ways emblematic of refugee health care in the U.S. It’s a less-than-lucrative field of medicine that often relies on individual physicians willing to eke out a living caring for an underserved and under-resourced population.

Parmar finds creative ways, often flouting norms or skirting rules, to fit his patients’ needs. As a result, Mango House looks nothing like the rest of the U.S. health care system and, at times, draws the ire of the medical establishment.

“How do you deliver the quality of care necessary, and that they deserve, while still keeping the lights on? It’s a struggle for sure,” said Jim Sutton, executive director of the Society of Refugee Healthcare Providers. “It’s these heroes, these champions out there, these cowboys that are taking this on.”

Osman brought her son, Jabarti Yussef, 33, to interpret for her. They have been coming to Mango House for 10 years and said that Parmar opens doors for them when they have trouble accessing care.

“If we ask for an appointment to get Medicaid, P.J. makes the call,” Yussef said. “If we call, we’re on hold for an hour, and then it hangs up. If we go to the ER, it’s a three-hour wait. Here, the majority of people walk in and sit for 30 minutes. It’s good for the community.”

As for Osman’s knee pain, Yussef asked Parmar, could they pay cash to get an MRI at the hospital?

Parmar said he would connect them with someone who could help Osman enroll in Medicaid but that it’s an imperfect solution. “Most orthopedists don’t take Medicaid,” Parmar said. Older immigrants need to have worked the equivalent of 10 years in the U.S. to qualify for Medicare. 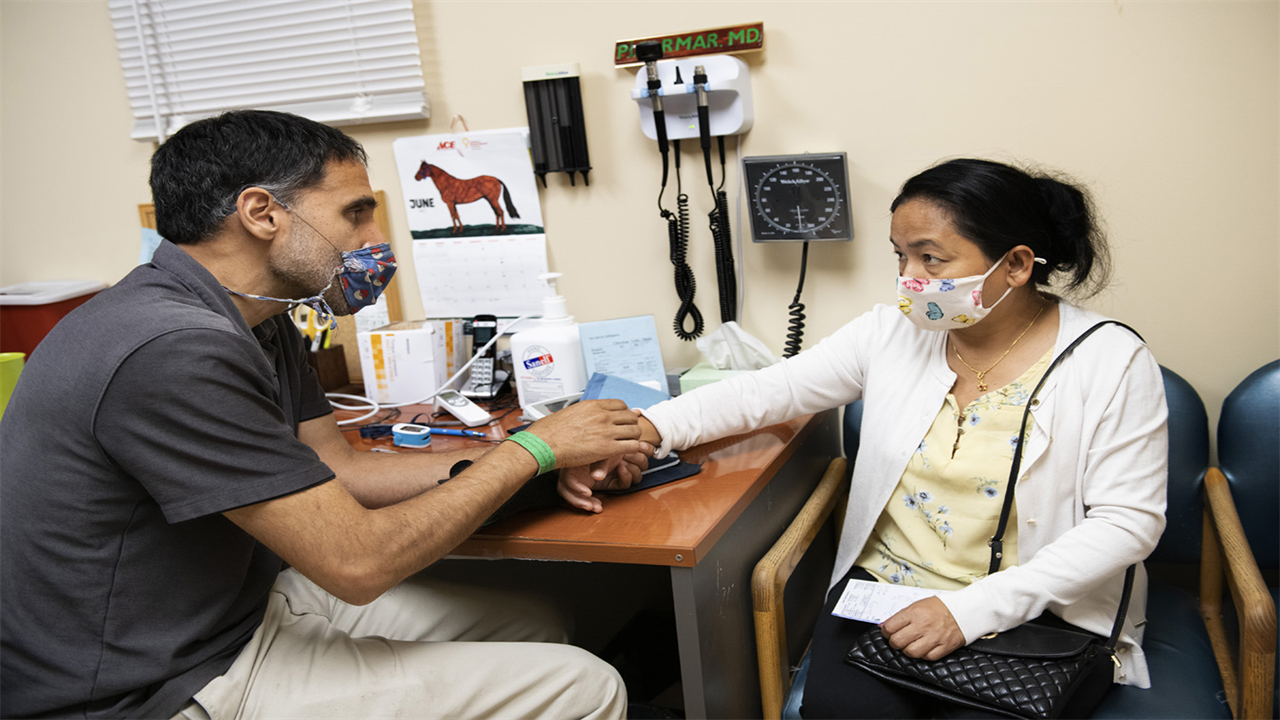 Medicaid, which covers low-income people, generally pays primary health care providers a third less than Medicare, which covers seniors and the disabled. And both pay even less than commercial insurance plans. Some doctors paint Medicaid patients as more difficult and less likely to follow instructions, show up on time or speak English.

Parmar said he realized back in medical school that few doctors were motivated to treat Medicaid patients. If he limited his practice to just Medicaid, he said dryly, he’d have guaranteed customers and no competition.

So how does he survive on Medicaid rates? By keeping his overhead low. There are no appointments, so no costs for a receptionist or scheduling software.

He said his patients often like that they can drop in anytime and be seen on a first-come, first-served basis, much like an urgent care clinic, and similar to the way things worked in their native countries.

Because he takes only Medicaid, he knows how to bill the program and doesn’t have to hire billing specialists to deal with 10 insurance companies.

It’s also more cost-efficient for the health system. Many of his patients would otherwise go to the emergency room, sometimes avoiding care altogether until their problems get much worse and more expensive to fix.

“Really none of our innovations are new or unique; we just put them together in a unique way to help low-income folks, while making money,” Parmar said. “And then, instead of taking that money home, I put it back into the refugee community.” 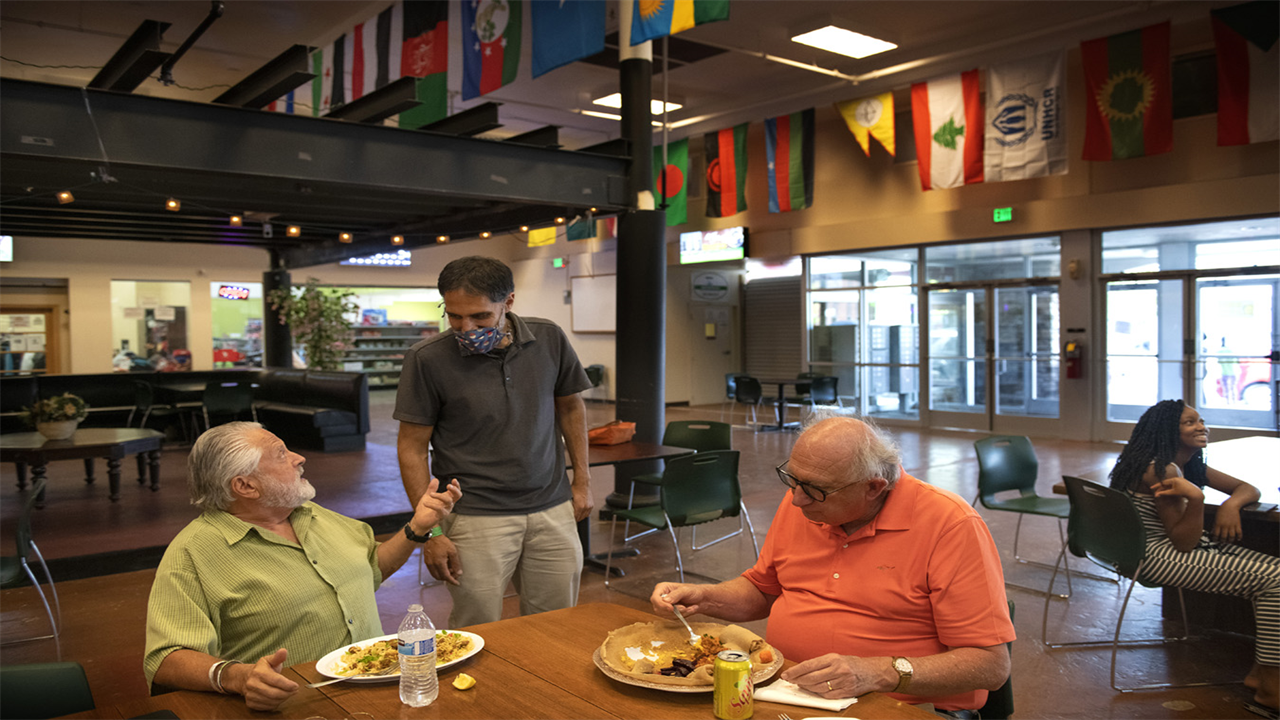 The son of Indian immigrants, Parmar, 46, was born in Canada but grew up in Chicago and moved to Colorado after college in 1999, where he did his medical training at the University of Colorado School of Medicine. He opened Mango House 10 years ago, buying a building and renting out space to refugees to cover the cost. Two years ago, he expanded into a vacant J.C. Penney building across the street.

“There’s a good three-, four-year dip in the red here, intentionally, as we move from there to here,” Parmar said. “But that red is going to go away soon.”

The covid pandemic has helped shore up his finances, as federal incentives and payment increases boosted revenue and allowed him to pay down his debt faster.

Parmar must navigate a host of obstacles while working to overcome financial and language barriers. A Muslim Somali woman needs dental care but is uncomfortable seeing a male dentist. A Nepalese woman needs a prescription refill, but she lives in Denver and so has been assigned by Medicaid to the safety-net hospital, Denver Health. Parmar won’t get paid but sees her anyway. Another patient brings paperwork showing he’s being sued by a local health system for a year-old emergency room bill he has no way to pay. A Nepalese man with psoriasis doesn’t want creams or ointments; good medicine, he believes, comes through a needle.

“A lot of this is, basically, geriatrics,” Parmar said. “You have to add 20 years to get their age in refugee years.”

When one patient turns away momentarily, Parmar discreetly throws away her bottle of meloxicam, a strong anti-inflammatory he said she shouldn’t be taking because of her kidney problems. He began stocking over-the-counter medications after realizing his patients got overwhelmed amid 200 varieties of cough and cold medicines at the drugstore. Some couldn’t find what he told them to get, even after he printed flyers showing pictures of the products.

Parmar’s creative solutions, however, often rub many in health care the wrong way. Some balk at his use of family members or others as informal interpreters. Best practices call for the use of trained interpreters who understand medicine and patient privacy rules. But billing for interpretation isn’t possible, so hospitals and clinics must pay interpreters themselves. And that’s beyond the capabilities of most refugee clinics, unless they’re affiliated with a larger health system that can absorb those costs.

“It’s a good thing to have the standards, but it’s another thing altogether to implement them,” said Dr. Pat Walker, an expert on refugee health at the University of Minnesota.

When Mango House began providing covid vaccines, residents of more affluent areas of town started showing up. Parmar tried to limit vaccinations only to those patients living in the immediate area, checking ZIP codes on their IDs. The state stepped in to say he could neither require IDs nor turn away any patients, regardless of his refugee-focused mission.

During a recent lull at the clinic, Parmar took stock of that day’s inventory of patients. Six were assigned to Denver Health, one patient’s Medicaid coverage had expired, and two had high-deductible commercial plans. Chances are he wouldn’t get paid for seeing any of them. Of the 25 patients he had seen that day, 14 had Medicaid coverage that Parmar could bill.

“We see the rest of them anyway,” he said.

How a Doctor Breaks Norms to Treat Refugees and Recent Immigrants https://khn.org/news/article/refugee-clinic-colorado-doctor-breaks-norms-to-treat-immigrants/